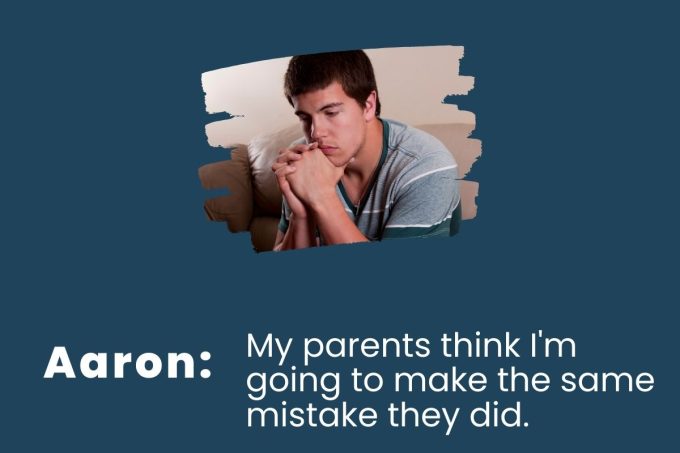 As a teenager, it can be hard to know how to express your desires to your parents while also respecting their rules and expectations. Aaron feels his parents are against his relationship, but compromise is a beautiful thing!

(Introduction) Life is messy, but things can get better. A word of hope for you and your teen, from Dawson McAllister.

Aaron: OK, I’ve been dating this girl for 4 or 5 months now. My parents had me at a very young age, when they were teenagers, when they were 15 and 17. And my parents think I’m going to make the same mistake they [did]. When the most thing her and I have ever done is kiss or whatever. We’ve gone along in our relationship saying, making out is as far as we’re going to get, until we know for a fact, we’re going to get married; which is a good 7 years away, after we’re both out of college.

Dawson: And what about her parents?

Aaron: They’re pretty much the same with her. Her ride doesn’t come down through our subdivision. So, we get to walk together and go to her house, but that’s only seeing her 5 minutes a day.

Dawson: The only way you’re going to convince them otherwise is to show to them that you are more mature than they think you are. So, if you act out, sneak around behind their back, you’ll get caught, and you’ll be going backwards fast. So, I would ask your parents if maybe she can come over with them in the house… see what I’m saying. Try to come up with some kind of a compromise here that allows you to see her and yet also calms your parents. So, what you’re going to try to do is be the most mature one of the bunch.

Dawson: Say, “I want to discuss this with you, and I want to try to show you that I’m being as adult as I can be. I’m not here to start World War III.” Who knows, they might lighten up.

Aaron: I hope so.

Dawson: OK, Aaron, well thanks for calling. Good luck to you.

(Conclusion) Connecting with teens is hard, especially today. Learn how to help the teen in your life by going to: TheHopeLine.com/radio.