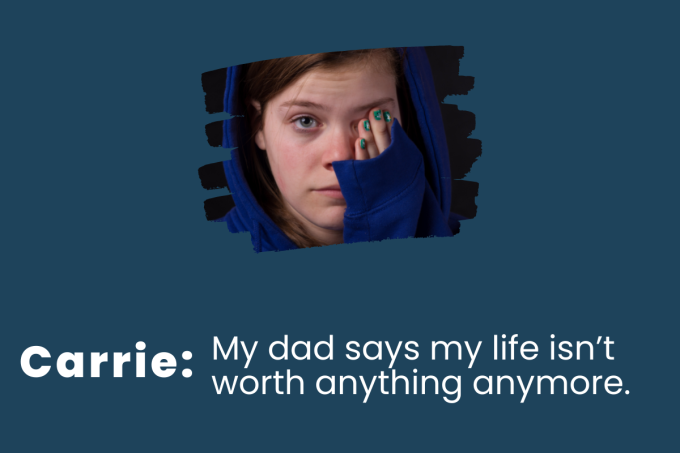 Carrie and her father’s relationship is strained. Her father’s said some hurtful, and negative things to her. Listen, as Dawson gives advice on repairing their relationship.

(Introduction) When your student or young adult is in crisis, where can you turn for help… a call with Dawson McAllister.

Carrie: Me and my dad haven’t been doing so well. We got into an argument because I asked him if one [friend] could spend the night with me.

Dawson: If who could spend the night with you?

Carrie: One of my friends.

Dawson: Why didn’t he want to have one of your friends spend the night with you?

Carrie: Because she’s like me. He says my life isn’t worth anything anymore.

Carrie: Because I started to smoke cigarettes and did weed.

Dawson: So, your life’s not worth anything anymore?

Carrie: Yeah, that’s what he told me.

Dawson: Well, that’s not true. Your life is priceless! Now, you maybe making some mistakes and trashing your body, and your soul, but that doesn’t mean you’re not priceless.

Meanwhile though, he’s right about the fact that the smoking and the pot is destroying your life. And if you’re with the wrong kind of friends, that will only encourage you to do the wrong kind of things, all the more. So, why don’t you write him a letter?

Dawson: And say, “Dad, I really love you.” Tell him all the reasons you love him. Tell him how it hurts your feelings when he said that your life’s not worth anything. And then tell him that he’s right about wrong friends mean wrong decisions, and “my habits are destructive.”

Dawson: And ask him, “How can we become father/daughter relationship healed? How can we heal the relationship?” I think that’ll touch his heart.

Dawson: Give it a shot, Carrie.

(Conclusion) TheHopeLine is for young adults and the people who love them. Find help and hope at: TheHopeLine.com/radio.